This project aims to develop a treatment that is radically different from any other approach currently applied to treat MS in daily practice. Recent state of the art analyses of the well documented multiple sclerosis (MS) brain autopsy cohort of the Netherlands Brain Bank (NBB) show high innate and adaptive immune reactivity in MS, also at progressive stages of the disease. Gene expression profiling of MS tissue suggests that viral activity possibly causing the immune response. Consequent demyelination and neurodegeneration account for the progressive neurological course of MS. Anti-inflammatory MS therapies in blood and lymph nodes are effective in reducing relapses in the early stages of the disease, but do not stop the progression of the disease and are not effective in late stages of the disease.

Lack of effect of current anti-inflammatory drugs in progressive MS is likely due to compartmentalization of the immune response behind the blood-brain barrier (BBB) in late stages of MS. Indeed, we recently demonstrated that this compartmentalized immune response mainly consists of tissue-resident memory effector T cells (Trm cells) and that mixed active/inactive lesions drive the disease in progressive stages.

Therapeutic approaches to restore damaged axons and myelin in MS are currently lacking. Parallel to our analyses of the MS autopsy cohort, we have a research line directed at promoting regeneration of axons in the central nervous system (CNS) using gene therapy approaches. State of the art viral vector technology has been deployed to deliver growth factors and enzymes that break down the inhibitory extracellular matrix present in neural scars of the injured nervous system. Given the fact that MS is characterized by multiple sclerotic scars, which hamper axonal outgrowth and remyelination, application of these newly developed state-of-the-art gene delivery techniques is warranted in MS. 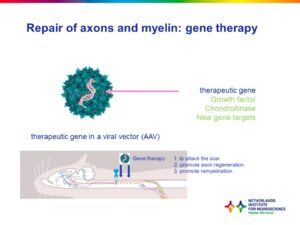 Read more
Back to Projects

Any cookies that may not be particularly necessary for the website to function and is used specifically to collect user personal data via analytics, ads, other embedded contents are termed as non-necessary cookies. It is mandatory to procure user consent prior to running these cookies on your website.